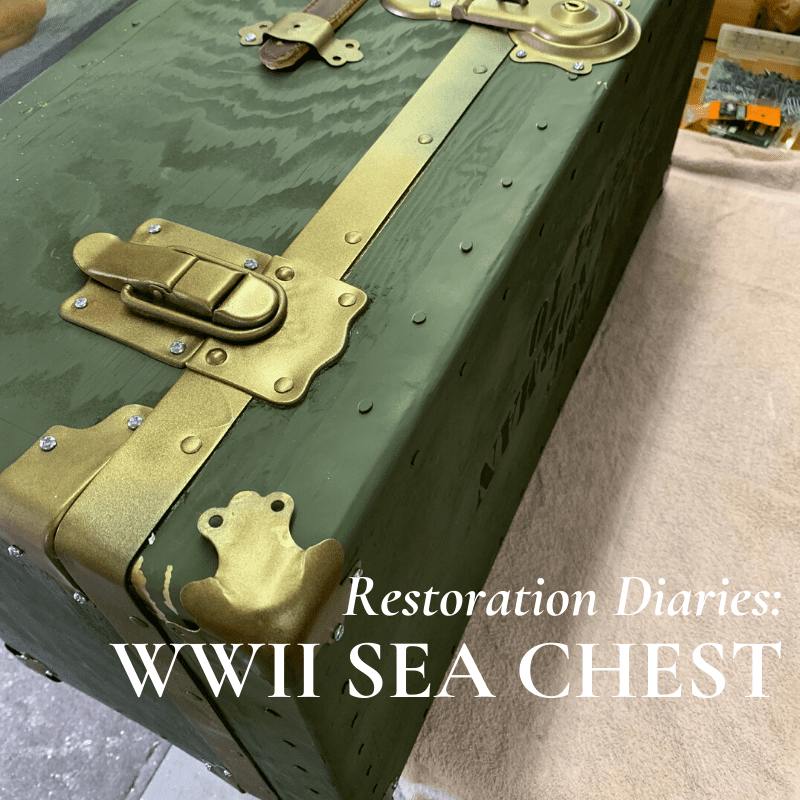 *This post may contain affiliate links, which means I may receive a small commission, at no cost to you, if you make a purchase through a link!*

This one has been a long time in the making. Ever since I was little, I loved my great grandpa’s old sea chest from the US Navy. I decided to restore his WWII Navy Sea Chest. He served for more than 40 years beginning in World War II and continuing through Korea and Vietnam.

This sea chest has survived a lot in its 90ish years of life! It’s been all over the world, during peace and war. And we are only now piecing together all the places this chest has been and projects my great grandfather worked on.

Some of these locations include:

I’ve started working on a book of my great grandfather’s life in the military which I will eventually have printed and stored in the sea chest.

**I’ve had many questions about how to get this information about your own relatives’ military service. You can request information from the National Archives here.

What is a Sea Chest?

First of all, let’s address what a Sea Chest is. A sea chest is the Navy’s footlocker. This is the trunk that each sailor is given to keep all of their personal items such as uniforms, pictures, letters, and items from home. It is typically placed at the foot of their bed hence the term footlocker. Though on a ship they are referred to as a Sea Chest and go under the bunks.

Each branch of the military has its own version of the footlocker and each variation will vary depending on the year and materials available. The specific model that we are restoring in this post was only made from 1934 to 1936 during World War II for the US Navy. I also have a couple of Marine footlockers. One from 1942 and another from the Korean War Era. These Marine footlockers look very different from the Navy Version though the inside trays are rather similar.

This WWII Navy Sea Chest spent 40 some odd years in the Navy, then moved a bazillion times since. It survived the military, ships under attack, a ship run aground, a massive flood, and being backed into with a boat trailer (that’s what cracked the back of it.) Needless to say, this sea chest was definitely hammered when I got ahold of it.

I started out researching these sea chests footlockers because I wanted to restore it as close to the original as I could. Let me tell ya, finding this information was NOT easy! Eventually, I was able to track down pictures of the original and what it was supposed to look like. I found that this specific style of sea chest/ footlocker was made only during 1936 which is around the time my great grandfather joined the navy. I found some good examples of variations and information here.

The footlocker I had, looked almost black and all of the writing had worn off. I found out that It was supposed to be the same color green as the tray inside (aka olive drab.) Most of the brass had been rusted and badly damaged, so I had a lot of work ahead of me.

We started by removing most of the old hardware so that we could clean and repair the pieces. This took quite a bit of work since the footlocker had been put together in a way that was not easy to take apart. Most of the rivets had been bent into place to prevent the box from coming apart which proved pretty frustrating when trying to remove them.

We ended up just replacing the piece at the back that had a hole because it was too far gone to save (as you can see. It got backed into with a trailer when I was a kid and it got slightly crunched… Oops!)

Next, we patched the holes and sanded the wood. There was a ton more patching to do than I originally thought. We also routed the edges because they had some splinters sticking out.

Our next move was to replace the rivets that we had to remove. Most of the remaining rivets had rusted through and were brittle. I would have preferred to save the rivets if it had been possible, but they just crumbled. So, we placed new ones.

We did make one major change to the design of this sea chest. The paper that originally lined the interior just crumbled, so we opted to replace it. I wanted it to look like the original, but I would also like to store some of my great grandfather’s military stuff in it, so…. we lined it with cedar! This way, the box itself is sturdier and the cedar helps to preserve his uniforms.

Next, we painted. As I said earlier, the military’s paint is called Olive Drab, but you can get the Rustoleum version in a spray can for cheaper. It is the Deep Forest Green from the Camo Collection which matches the military’s Olive Drab. I went ahead and used the Rustoleum spray version which was so much quicker and easier. It did take two cans to cover the entirety of the sea chest.

I made the stencil with a Silhouette machine, but there are several other ways to achieve this. But I did track down the font, which is called Army Thin and I used 2-inch letters. (I did blur out the personal info)

The stenciling on the lid includes:

The final thing to do was to reassemble the sea chest. We reattached all the cleaned up hardware and ta-dah! All done!!!

This transformation took A LOT OF WORK! I don’t know that I would attempt to do this again, but I had to share with all of you the amazing results!

Hopefully, you have enjoyed and learned from our journey to restore this World War II Navy Sea Chest. Thankfully my dad helped me out with this project because I would have given up on my own. I seriously never could have done it without him! In attempts to preserve our history, would you pursue a project like this? My dad originally planned to restore his dad’s footlocker from the marines, but we decided that the restoration took so much work, we would rather build a duplicate from scratch (not to mention grandpa’s footlocker has a massive bullet hole in it.)

Watch for more restoration projects in the Project Showcase Gallery! 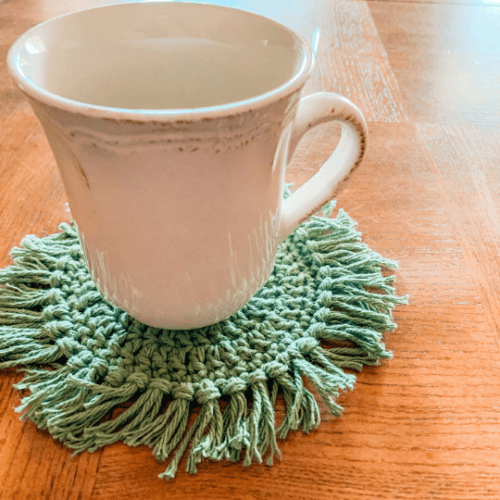 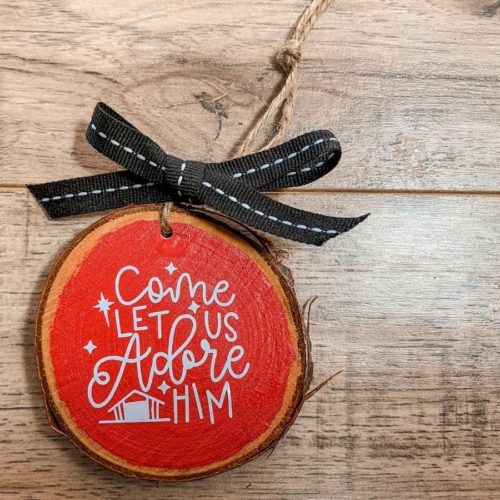 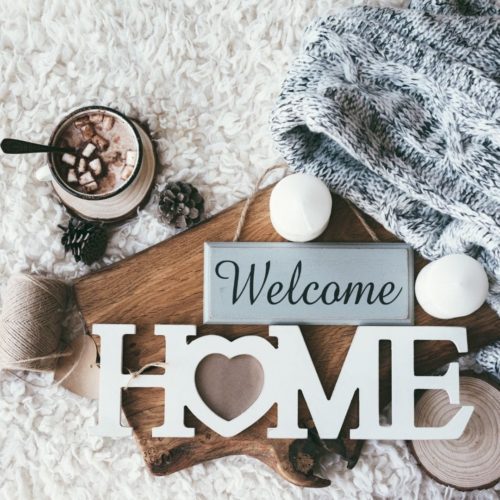 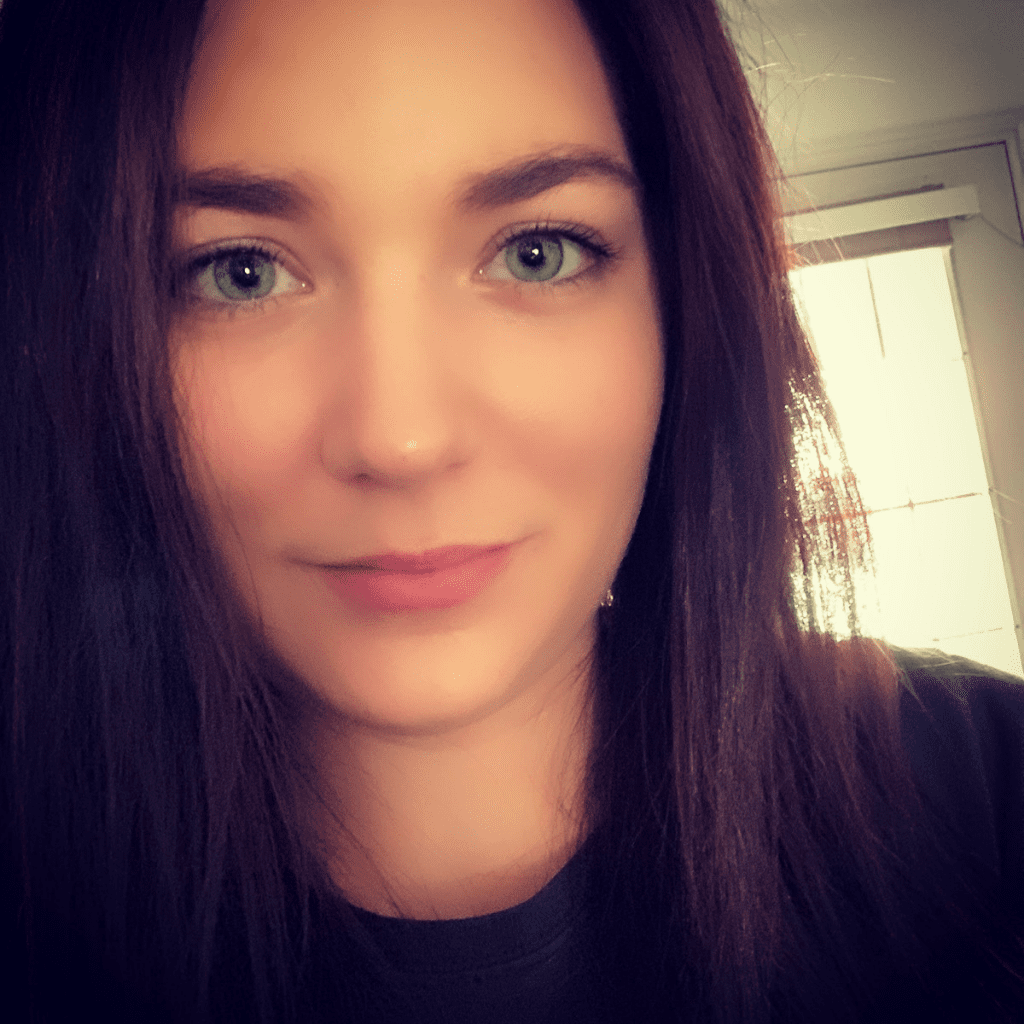 Engineer, DIY Enthusiast, and Jackie-of-all-Trades! I love making just about anything! Join me for crafts, crochet, sewing, and DIY Madness!